In 2009, when Pan Honggang and Hu Youzhen were under-graduate students of the sculpture department at Sichuan Academy of Fine Art, they participated in an award scheme for young artists—the Earl of Cromer Scholarship Award for Contemporary Chinese Artists . The award, held annually at the academy, is open to students from across the country. In 2009, through its alignment with a similar award scheme operated by the Luo Zhongli Foundation, it received an impressive number of entries. Pan Honggang and Hu Yuzhen won the top award.

Their work stood out not just because it was sculptural, and took the form of a well-thought through installation, but because the works seemed uniquely to express an emotional state close to the artists. It was, thus, deemed expressive of their generation, and that used a highly individual approach to articulately that expression. The judges, of whom I was one, were unanimous in presenting these two promising young artists with the award.

Pan Honggang and Hu Youzhen’s works comprised a group of eight semi-figurative sculptural forms that were part-human and part-animal, but that were all products of the artists’ imagination. Each of the eight figures was placed on a carefully selected chunk of tree trunk that had been preserved with care: dried to relieve it of moisture, such that the tree bark remained intact along with the natural beauty. This group of nature’s plinths was placed together just close enough, but just far enough apart to suggest a copse of trees. But in keeping with the unnatural nature of the creatures Pan and Hu had created, the ground beneath them was made of sand, not earth.

On encountering these creatures, one is immediately struck by their pale delicate “skin”. Whether seen in full figure or as a bust (as three of the individual pieces are) this skin has a uniformly bluish and translucent quality, as if the fine veins and blood vessels that we can see barely beneath the surface, and which have been created, painted, with painstaking care, are vibrating with life. Here, the artists’ careful choice of materials becomes apparent. Having been first completed using clay, they reproduced from moulds using a light weight polymer resin. This material is highly flexible in the surface finishes it can support. This first group of figures also showed the artists in the process of experimenting with various finishes—some shiny, some matt. This exploration is, to some degree, still in progress.

All of the figures in this first group wear some kind of head piece, which lends us the impression that even if we speak to them they would be unable to hear us. That motif represents one element of the isolation that surrounds the figures individually and as a group. The second element arises from the sense of physical containment that is suggested by the stunted growths that have been placed where the figures’ arms should be: only one of these sculptures is equipped with arms in the human sense. The rest have some form of stunted growth closer to the wing stubs of a flightless bird or a marsupial flipper. At times standing tall, at times perched on their wooden stilts, these creatures are thus inalienably separated from each other. In “clipping their wings”, the artists literally deny their creations the physical possibility of leaving their perch, thus once again reinforcing the aura of isolation, even as these figures appear to form a group. That sense of physical restriction is experienced by the audience as a sense of claustrophobia.

The final element that seals these creatures’ isolation from us lies in their gaze. Hard as we try, we are unable to make eye contact with any of them. Of course, that’s because these artworks are not real, even though at times they almost seem so. That aside, their gaze is consciously deflected away from any potential contact, at once introspective and obtuse.

In the artists’ words: “In our works, the form is our baseline, which we employ to convey our emotional state.”

Perhaps, in these curious forms, some viewers might find creatures they recognize from comic books, from video games, from films. Yet, whatever the influences that lie behind these works, the final forms produce an aura, an ambience, that speaks directly to human experiences common amongst today’s generation of one-child children in China. But in one sense, they have a resonance that extends beyond China alone, for across Europe, too, today many children are also single children and are equally products of a computer age, dominated by electronic social networks that place invisible but ever present immaterial barriers between these individual adolescents and society. In many ways, this young generation has morphed into exactly that alienated collective of frustrated, conflicted, and potentially paranoid or damaged individuals suggested in the character of Pink in The Wall, British rock band Pink Floyd’s prophetic 1979 vision of a society that looses grip on the place of the individual and what were once defined as normal social relationships.

From that first group of eight pieces, a second group has evolved: seven new creatures are as a second generation to the first. In some ways, for obvious reasons of their physical form, these new figures are even more constrained then the first. Their arms, where these exist, almost glued to their sides, or joined to the body like the webbed digits of a water bird. The aura here is more silent, more haunting. The natural development of these creatures stunted in ways that did not afflict the first.

Having said that, in line with the aura of this type of artistic production in the early twenty-first century, Pan and Hu’s magical creatures have their cute side, much as we might expect from artists belonging to a young generation fully aware of Hello Kitty, Japanese manga, and the work of artists like Murakami and Nara. Yet beyond this “cuteness”, it is the haunting air of isolation and vulnerability that strikes the viewer most profoundly. In the exhibition space, the individual characters are placed in close proximity to each other. To the viewer encountering them, they appear to have clustered together as a measure of security or self-protection. One can almost hear them muttering words of reassurance to each other as if they wait with baited breath until the viewer has passed on and they are safely beyond the range of a human’s gaze. Quiet to the point of silent, still to the point to stasis, seems to be their natural condition; penumbra their preferred habitat. As viewers, and with these creatures inside, we are made to feel as if the exhibition space has been transformed into some kind of zoo: but the question then becomes which of the occupants, these curious creatures, or us is the animal on display?

Pan Honggang and Hu Youchen: Them or Us? 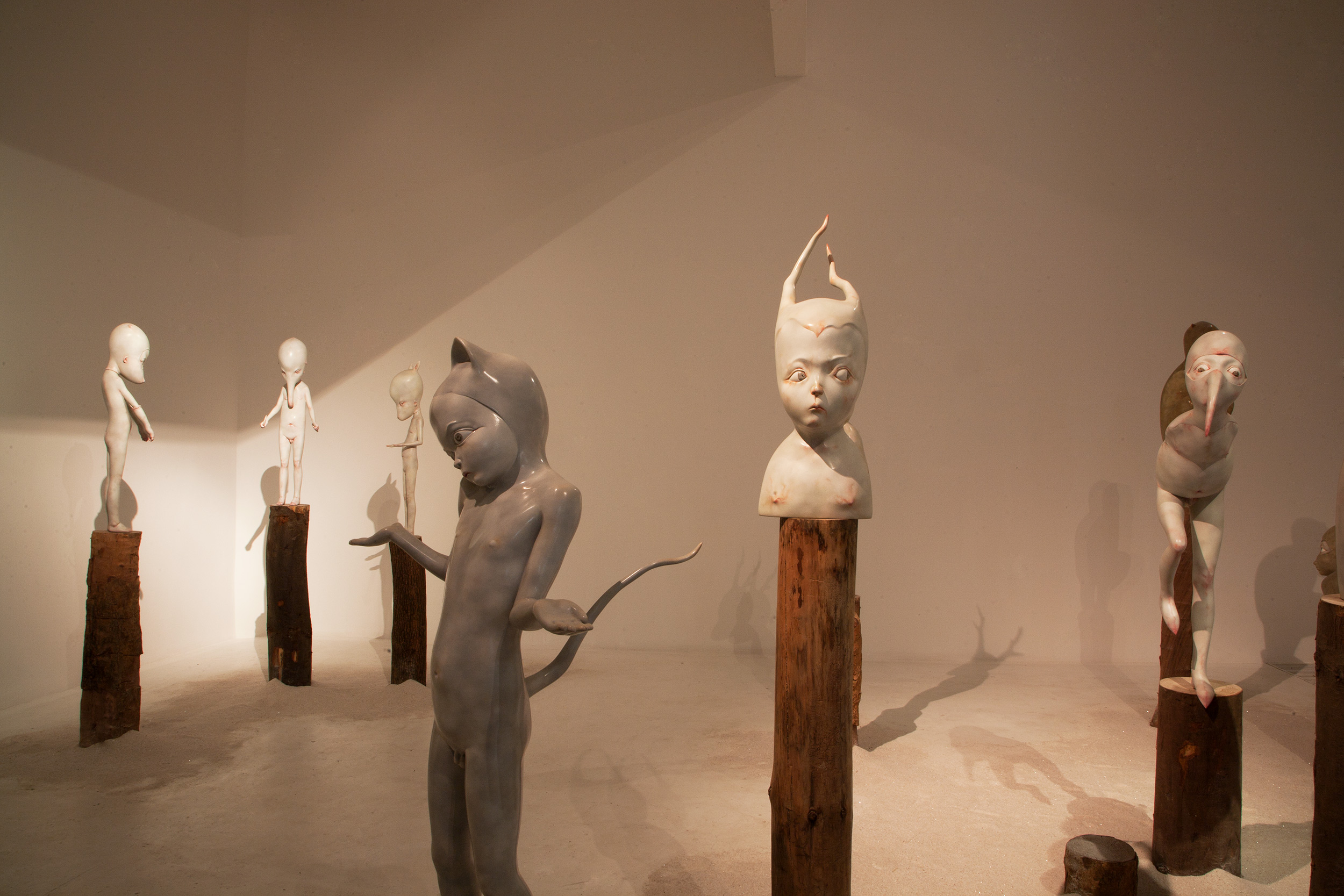 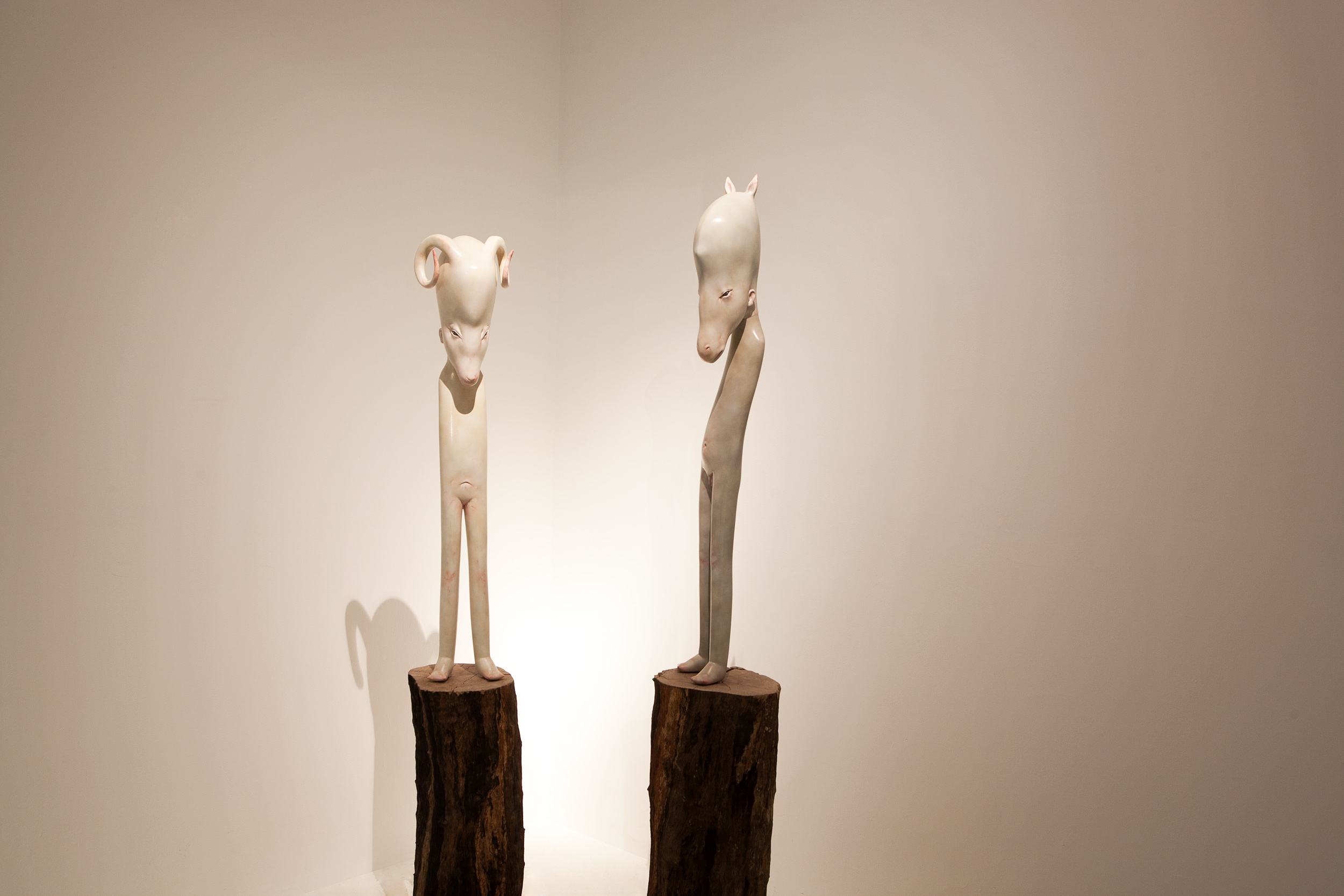 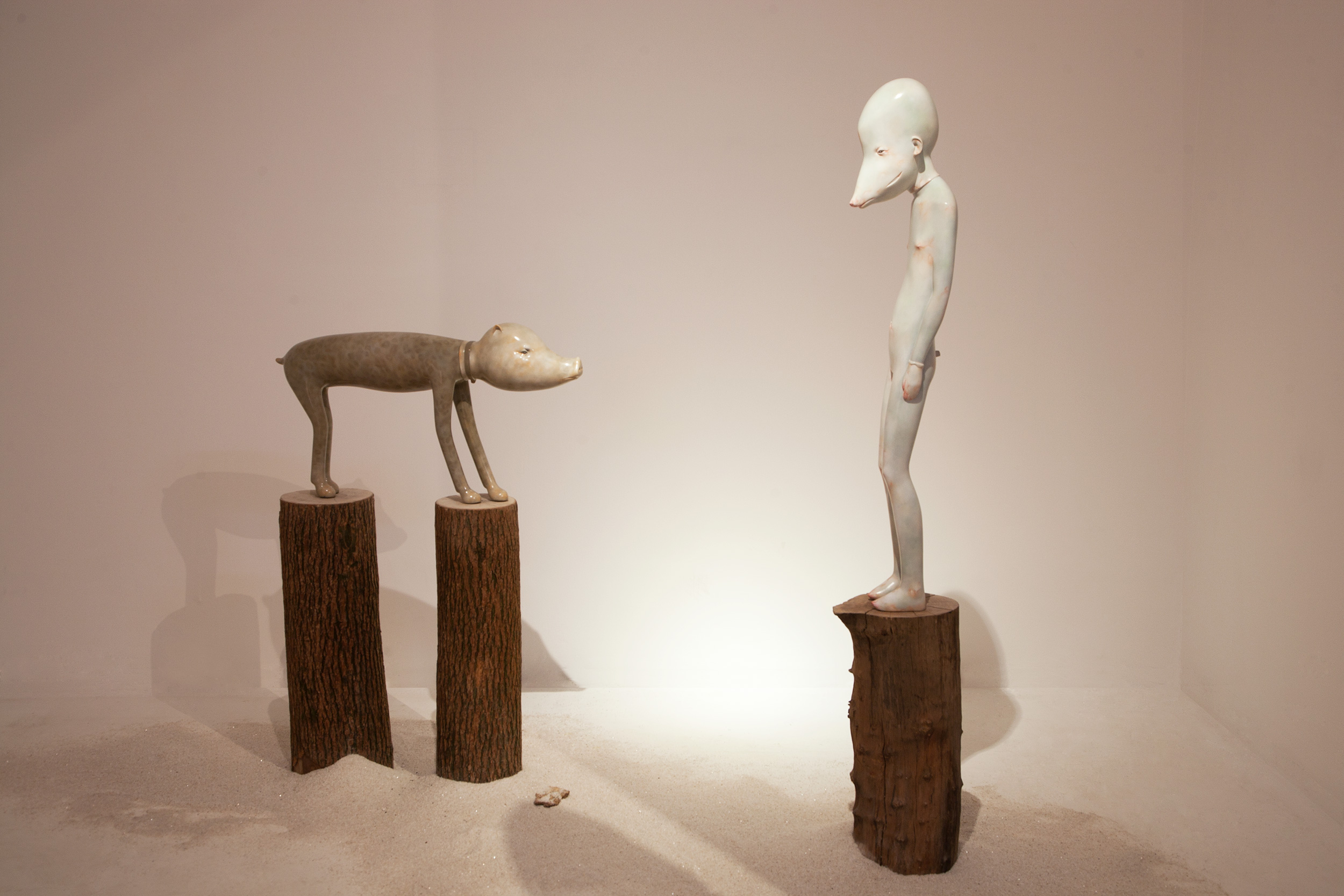 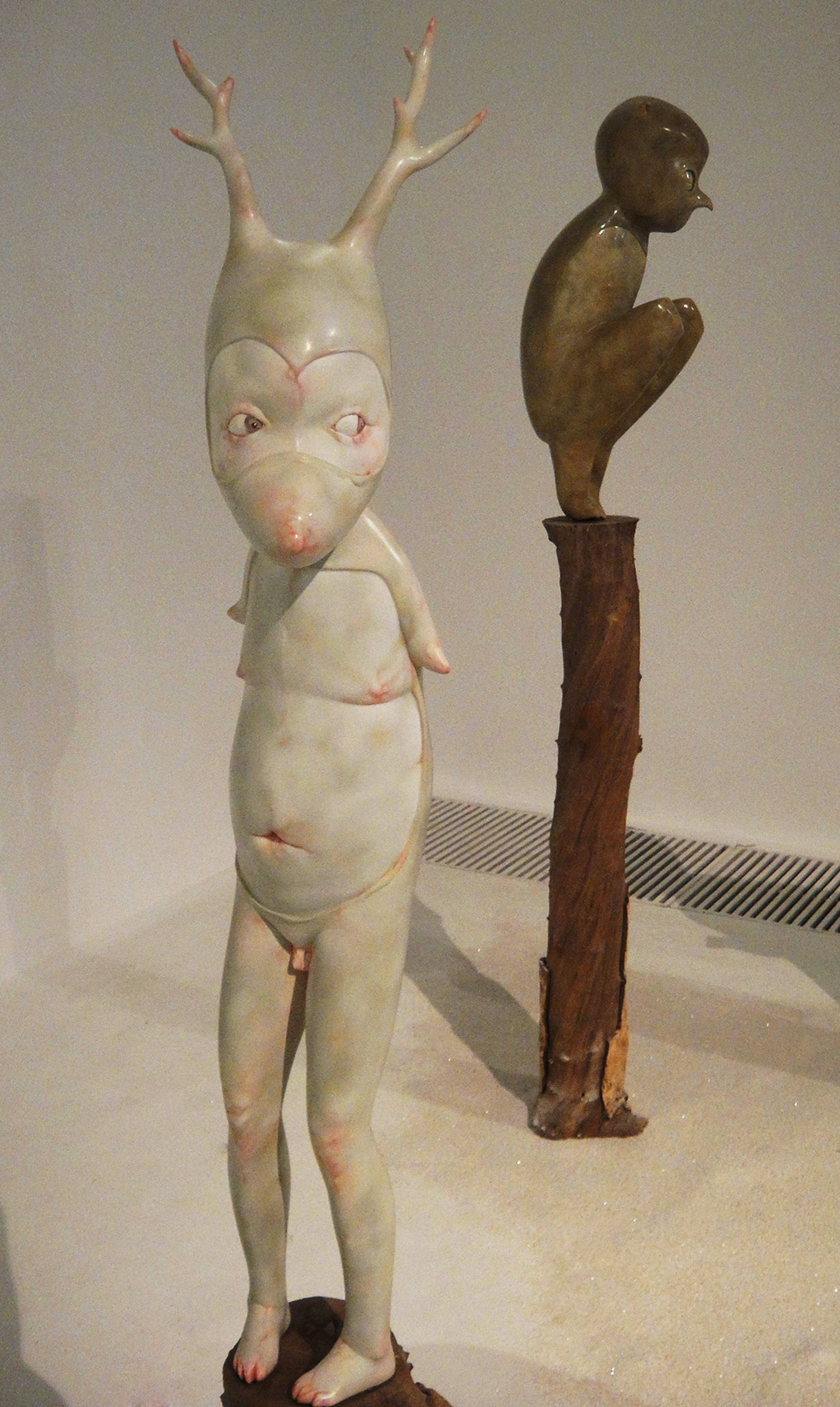