Zhuang Hui (b.1963) and Dan’er (b.1983) have collaborated together since 2005. In their work Leftover Material From the Carpenters, they have replicated 27 pieces of ‘off-cuts’ or debris produced by a carpenter. First molding the pieces with clay, the artists have casted these remnants into copper objects five times their original size. Commonly dismissed as surplus to our daily life, the enlargement enables viewers to become aware of the unique physical characteristics of these objects, which have been rendered in dramatic form. The artists have attended to every detail, going as far as to meticulously recreate the natural contours of the original wood pieces with acrylic. The sculpture embodies a contrast of materials and employs methods of production that unsettle a relationship between intrinsic value and an objects outward appearance. Lying across the exhibition floor, these irregularly shaped fragments mimic the craftsmanship and skill of the absent carpenter, whilst the dramatic ‘offcuts’ reappear like curious objects from a bygone era.

Jiang Zhi (b. 1971) works across a range from media from video, photography, writing, poetry, and sociology to interrogate the nature of the image. Rather than highlighting homogeny, the artist applies repetition to analyze permutations of change as a concept applies itself across a variety of materials, mediums, and subjects. Elegy is a series where ‘light’ is used as a counterpoint between its depiction in Western art history and its common description as ‘lines of light’ in the Chinese language. In this work, Jiang Zhi exaggerates the physical force of light to create a tension using invisible concepts such as pain. The fishhook nylon lines pierce a variety of Baroque still life subjects to unsettle classical associations of light used to signify salvation.

Liu Zhuoquan (b.1964) draws from the folk-art tradition of Neihua painting to play with our impulse to classify and collect images to understand the world. Neihua refers to an artisanal technique dating back to Qing Dynasty, when craftsmen would painstakingly render images onto the interiors of snuff bottles. Liu Zhuquan adapts this tradition by employig glass bottles suggesting a scientific laboratory, which house his visual experiments. In Tender Sweets, the artist realistically mimics the appearance of common chemical labels and combines this with smudges of mineral color to gently hint at a hidden violence underlying a potentially poisonous substance. The paintings are directly applied with a bent brush and often alternate between interior and exterior pictorial planes. Similar to vignettes, the artist describes his work as self-contained worlds that draw attention towards aspects of our daily lives, together the bottles propose an open system of interpretation, and they invite viewers to form multiple connections between each work.

Guan Yong’s (b.1971) seminal paintings apply a visual language that is simultaneously informed by China’s history of revolutionary art as well as conceptual influences that underpin a new system of information exchange. In Guan’s paintings of book-filled shelves, sensory details such as pigment, color, and texture are augmented with a pictorial flatness. With this technique, a painterly ‘expression’ has been subdued and visual details are partially included to invite open interpretations. Combining a color palette inspired by revolutionary art with the minimal vernacular of modern culture, the bookshelves outline a backdrop for a ‘utopian’ world to emerge. This iconic series of work presents a concise color study of the everyday materials as they testify to a new vocabulary of painting. Books of different shapes and sizes have been meticulously painted to reveal remarkable variations of form, an absence of hierarchy between its subjects, and an open-ended representation of knowledge. 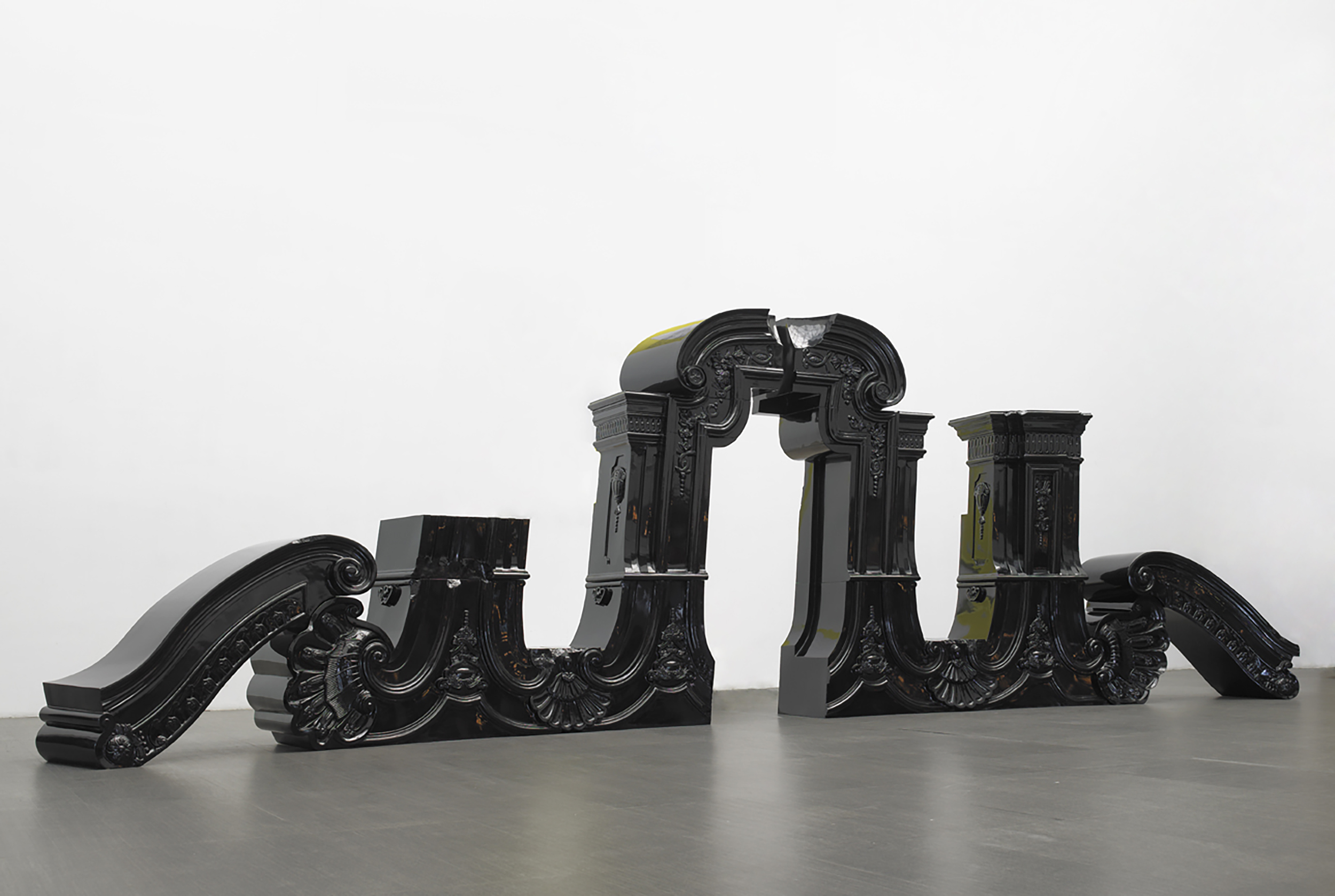 Magician Space are proud to present 11 Degree Incline by the artists Zhuang Hui and Dan’er to celebrate the inaugural Art Basel Hong Kong art fair. Curated in collaboration with acclaimed Tokyo-based curator Yuko Hasegawa, this will form part of the new Encounters section, a large-scale international collection of works sited around prominent positions throughout the fair.

11 Degrees Incline is a hybrid of elements informed by the past and present of both the East and West. Zhuang Hui’s 11 Degree Incline comprises of iron, copper, and stainless steel covered in high gloss black varnish. The elaborate design is produced from a relief created using the peculiar fragments that remain of the Dashuifa Fountains. Originally commissioned by the Qianlong Emperor, the fountains were designed by the Italian Jesuit missionary Giuseppe Castiglione alongside contributions by many other European artists of the time. Once the grandest centerpiece of the now ruined Western Mansion, together with the Old Summer Palace, the structure was ravaged in a fire laid by allied Anglo-French forces during the Second Opium War.

The sleek materials used by Zhang Hui and Dan’er exude the decadent luxurious qualities of a cosmopolitan lifestyle. Conversely, the original Dashuifa was crafted with stone using a mastery of skills now scarce in the modern era. By recouping this structure from the past with modern processes, the conjunction of old and modern skills has enabled the artists to shift towards a contemporary open question and subvert singular readings of this monument.

As the title suggests, Zhang Hui and Dan’er’s artistic intervention features a radical gesture that casts this historical symbol with a tilt measuring 11 degrees. Through this minimal act and deliberate choice of materials, the historical tension permeated by intrigue and conflict moves from the past to the contemporaneity of the present. For the artists, the trajectory between past events and present are continually negotiated by ‘rumours, stories, and thoughts’, which have become re-embedded in this sculptural gesture.