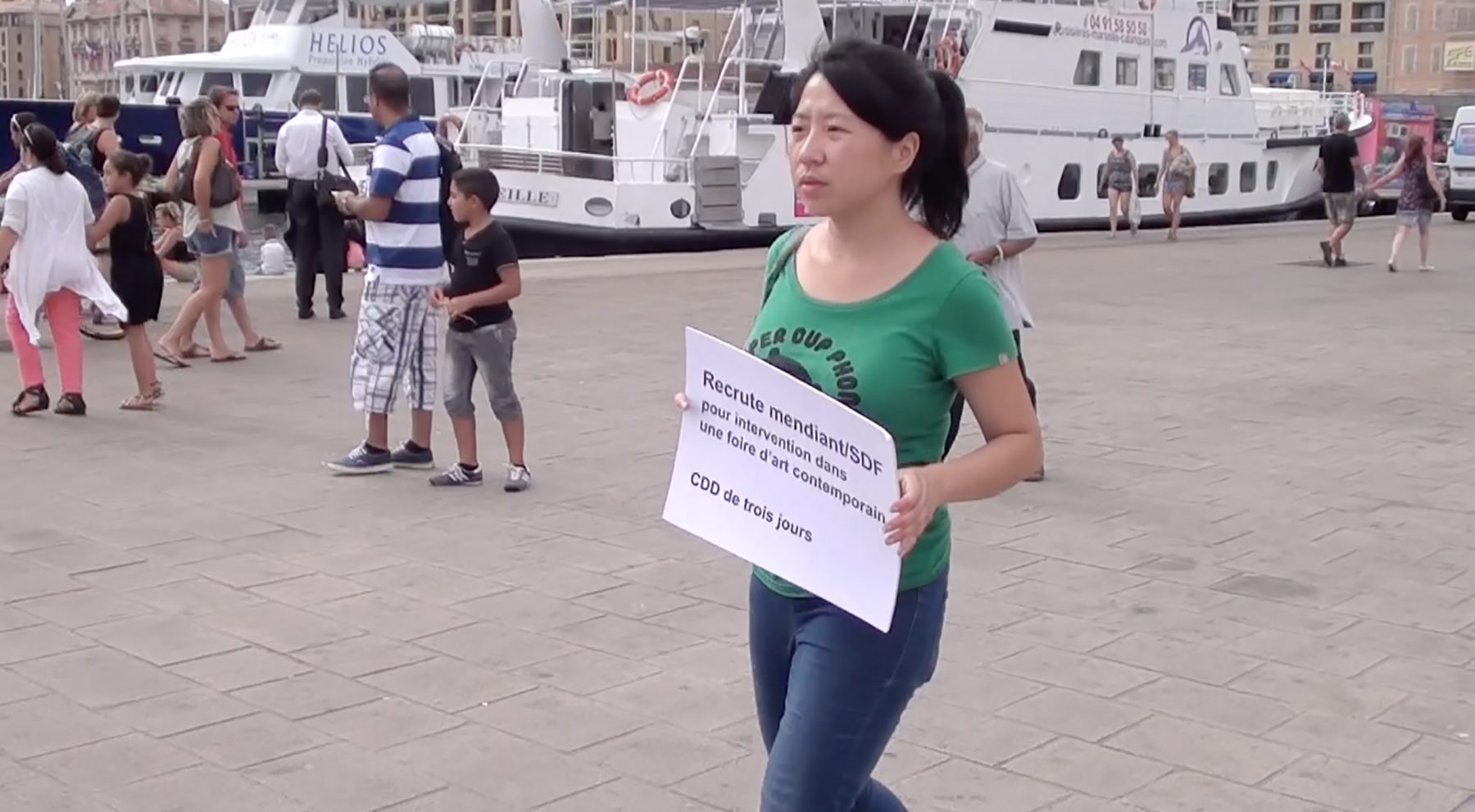 The practice of the Paris-based artist Qingmei Yao (Zhejiang, 1982) could be summed up by a few provocative, humorous words: the caricatured, farcical performance of capitalist society. She stimulates us in the real world with actions, interventions in the urban space, in which she is the main protagonist, the antithesis of her surroundings; these interventions arouse curiosity and perturb passers-by, such as the gesture of incessantly rubbing a 100 euro note in Parisian areas of varying social status (Sculpter un billet de 100 euros, 2014), or singing the third verse of the revolutionary anthem L’Internationale – referencing the “three betrayed ideals” of the French Revolution – in the tax hEaven of the Principality of Monaco, only to be interrupted by the arrival of three police officers (Le troisième couplet d’Internationale Solo à Monaco, 2012).

Added to her sharp, irreverent critique of global ideology and capitalism is dressing up and disguise. In Invention d’un langage hybride (2011) the artist doggedly pursues the absurd undertaking of creating a universal idiom that beggars belief, by blending two completely different tongues – French and Chinese – through a phonetic language; while in Pré-performance de Mme Ling .V sur l’avenue Montaigne (2013-2014) she plays her alter ego Ling – as a ‘nouveaux riche’ Chinese woman, Mme Ling .V, tottering between her apartment and a Vuitton boutique – the distance, as ideological as it is subjective, between East and West, seems to have been overcome in the name of a pathological consumerism and a shared social status.

In Recrute mendiant/SDF pour une foire d’art contemporain (Hire beggar for a contemporary art fair, 2015), Yao investigates on the circulation of wealth within art fairs and goes towards the only missing participants from the public event: the beggar who has been hired in the streets of Marseille with a shortterm contract for them to play their own role. Like in a casting, the artist-employer displaces the hiring space of the office to the exhibition space while engaging a process of negotiation and selection of possible candidates with a list of criteria (appropriate conduct within the privatized space) and a list of conditions (purchase of the comedian/performer status through the short-term contract), and according to the availabilities of the candidates. By creating the status of the beggar-employee, the artist-employer transports the audience into a theatre of the real in the same as it was sung in the prelude of The Threepenny Opera by Brecht: “beggars beg (…)*”, artists artistize, curators curate, dealers deal with, and collectors collect”.